I Sign copies of Crail History and Guide with:
Best Wishes, Trevor Smith,
but am happy to insert any greeting of your choice. 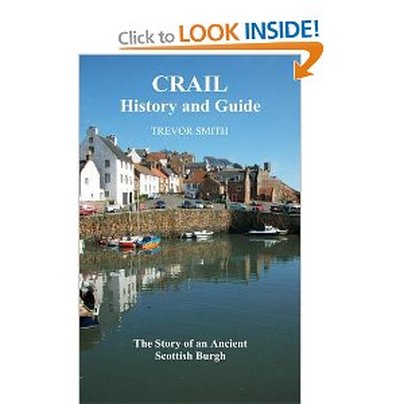 Crail in the East Neuk of Fife is celebrated as having one of the most  picturesque harbours in Britain, set in a eautiful, biologically and  geologically rich coastline, but less well known is Crail’s long and colourful   history now brought to life in this book.

I begin by discussing  the activity of pre-historic hunter-gatherers in nearby Fife Ness, then visit  Constantine’s and Caiplie caves with their early Christian symbols and long history of human habitation.
I unearth some of the oldest written references to Crail, and look at the history of St Mary’s Church, with its   graveyard memorials, and the symbolism of the 8th century Pictish cross slab.

The book discusses Crail’s former prosperity as an international trading centre, its weekly market ratified by Robert the Bruce, and its fluctuating success as a fishing village, while emphasising the dangerous nature of the  coastline with which mariners have had to contend.
We witness the effects of  plague and civil war in the mid 1600’s, and the shameful witch hunts. In  the  1880’s, Crail’s legendary isolation was broken by the arrival of the railway, when it re-invented itself as an immenselypopular holiday &  golfing resort,  in which Crail Golfing Society played a significant part.

Crail’s twentieth  century history is dominated by the role during World War  II and beyond of its  now abandoned airfield at Balcomie currently the venue for  motor sports and car  boot sales.

The book ends with some bedtime reading -  a swashbuckling  account of a duel between master swordsman, Sir William Hope of  Balcomie, and  his French counterpart. Full of fascinating insights into the life of earlier  centuries in Crail, this book is essential reading for  residents and visitors  alike.